Come to Chicago! Buy a book and get a cookie!

My November 27, 2013 post was about Freek Lankhof; a man who served the translation and interpretation profession in the U.S. for over twenty five years with dedication and friendliness. This time, I am writing to thank him for his invaluable services and wish him well as he recently announced that he is closing InTrans Book Service; an announcement that was received with deep sadness by many of us. 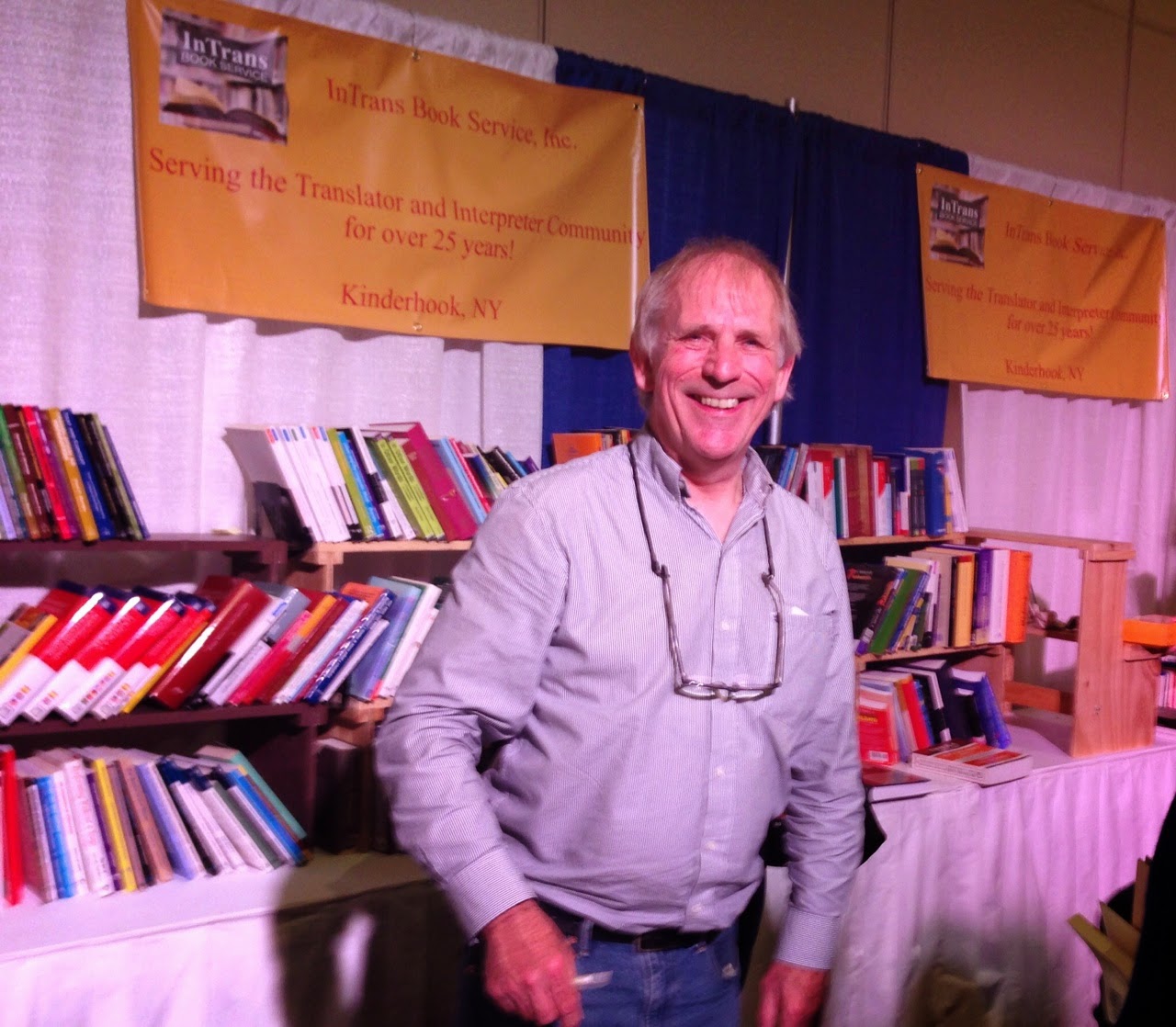 As the annual meeting of the American Translators Association approaches, I cannot help thinking of the fact that our friend Freek would not be in attendance as he had done for so many years. Today, he announced that we will be one of the exhibitors at the upcoming ATA conference in Chicago the first week of November.  He also promised the cookies –his sister Marjan’s famous boterkoek– will be fresh. Yum!
During the ATA conference, Freek will be having a big sale and invites everyone to stop by his booth. He also invites those who will not be in attendance to take advantage of  this bargain on the InTrans Book Service web site. “You will find lots of titles at reduced prices”, and more will be added in the upcoming weeks, he pointed out.  I encourage everybody to support Freek as a way to thank him for his invaluable services.
While I am happy to see Freek in Chicago, I also know that saying goodbye will be hard. Fortunately, there is the certitude that he will soon have more time for one of his favorite activities: hiking.  When I think of that, I envy him.
See you in Chicago!
Posted by Gladys Matthews at 11:40:00 AM No comments:

About a year ago, a very good friend and colleague, Liz Essary, asked me what I knew about language-neutral teaching. Not knowing much about it at that time from personal experience, my answer was that some well-known and respected colleagues were providing training in English for aspiring interpreters of languages of lesser diffusion; that is, languages spoken by minorities in the United States for which there is no certification.  At that time, I also knew about a series of online language-neutral court interpreter training courses and programs offered by the New Mexico Center for Language Access for court interpreter candidates seeking certification in court interpreting.

Teaching interpreting on-line is something I have been doing for over two years now, and it has been an exciting and rewarding experience.  Even more exciting is what has prompted me to write this blog post – namely, teaching a language-neutral course for an entire term in the Master of Conference Interpreting (MCI) of Glendon College of York University this fall. Glendon’s MCI includes six language threads: English-French, English-Spanish, English-Mandarin, English-Portuguese, English-Arabic, and English-Russian. Teaching interpreting in so many language pairs, requires an enormous investment in faculty and course development, while the number of students in some of the language pairs may be small.

A key element to teaching in a language-neutral approach is self-assessment, which I have always taught no matter the approach followed. When reviewing their renditions, whether at home or in small groups, students must know what to look for to improve their performance. This includes the obvious elements of accuracy and completeness, but also being mindful of inflection and enunciation.  Is the voice clear and pleasant or is it squeaky or monotonous, etc.?   While the language-neutral approach will be followed this fall semester, students will also receive language-specific instruction to develop essential skills in sight translation, consecutive and simultaneous interpreting.

I am thrilled to teach using this language-neutral approach, which, no doubt, will pose challenges along the way.  I will be reporting on this experience in a future post.
Posted by Gladys Matthews at 3:40:00 PM 1 comment:


In an effort to reduce court system caseload and to provide the parties with more control over the outcomes of a dispute, mediation has appeared as a viable solution.

Fascinated by the legal field, and especially by the language of the law, several years ago I sought and gained certification as a court interpreter.  About two years ago I started interpreting in civil cases - mostly family law cases like paternity actions, child support and marriage dissolution proceedings - and got to know the various judges that hear this type of case.  One of them told me about mediation and the need for bilingual mediators, and this suggested my next professional move. While I love being a court interpreter, and hope to continue interpreting in court settings, I had been looking for an activity that would allow me to use my language and interpersonal skills as well as my personal and professional experience more broadly and freely.


Mediation resonated with me because I have always enjoyed the role of a facilitator.  I enjoy being a professor precisely because the role of a teacher, at any level, is that of a facilitator of the learning process – especially in today's information era where learners have access to inexhaustible information. While the role of the interpreter is to facilitate communication between two parties that do not share the same language, the scope of the role of the interpreter did not provide me with the opportunity I was truly looking for; namely the opportunity of offering a bit more of myself in my work.

Mediation is a problem-solving process in which a neutral and impartial mediator encourages and facilitates two or more parties to resolve their dispute.  As an informal and non-adversarial approach aimed at reaching a mutually accepted agreement shaped by the parties according to their individual needs and concerns, it is an alternative to a court proceeding (although oftentimes mediation is court-ordered).  Once it has been file marked (signed by the judge and stamped by the court’s clerk), the agreement is legally binding and enforceable.

The mediator assists parties in identifying the issues, clarifying priorities, exploring areas of compromise, and finding both points of agreement and legitimate points of contention.  The number one priority the mediator stresses to the parties is that any agreement they reach is to be based on their own decisions and not the decisions of the mediator. In mediation there are no winners or losers, just satisfied individuals. When an agreement is reached, it should be an agreement people will be able to keep. It may not be what the parties wished for at the beginning of the mediation session, but it should certainly be something they can find satisfying.  The mediated agreement may not resolve all of the disputed issues, but the process can reduce points of contention.  While an agreement is not always reached, parties and their representatives are required to mediate in good faith. Otherwise, mediation would prove to be a useless processes.

It boggles the mind to find out that sometimes all a party wants or needs is to be heard – to have the opportunity to tell his or her side of the story.  After being heard, the hurt and resentment seem to start to fade away and parties can move on with their lives, which is healthy.

Aside from my regular professional activities, preparing for entering the world of mediation has kept me a bit busy, which justifies to a larger extend my absence from my blog.  To become a registered mediator in the state of Indiana, I took a 40-hour domestic relations mediation workshop which is required for inclusion in the Indiana Domestic Relations Mediator Registry.  I have been fortunate enough to have joined, by invitation, the well-known and highly-respected mediation practice The Mediation Option, located in Indianapolis. As a non-attorney, I can mediate in family relations issues which involve mostly dissolution or marriage issues such as child custody, child support and division of marital assets.

It won't surprise you to know that I specialize in mediations involving non-English speakers. In addition to mediating in languages other than English, I have also acted as an interpreter in mediation sessions – an interesting experience that I will be writing about soon.

Mediation has enormous potential benefits and continues to grow as an alternative to traditional court processes. These benefits should be available to non-English speakers, as well.
Posted by Gladys Matthews at 12:40:00 PM No comments:
Newer Posts Older Posts Home
Subscribe to: Posts (Atom)

I was born in Costa Rica and moved to Canada after completing my undergraduate studies with a degree in French from the Universidad de Costa Rica. While in Canada (my first time around), I obtained a Master's degree in terminology and translation from Université Laval in Quebec City, and a Ph.D. in linguistics with an emphasis on legal translation, also from Laval. My doctoral dissertation was a trilingual analysis of the translation of documents related to the dispute resolution process of NAFTA. I served as Course Director in the Master of Conference Interpreting of Glendon College of York University, Toronto, and developed two court interpreting courses –one taught in English and the other in English-French. I taught them on-line for five years.

My personal journey took me to the United States, where I have served as program director and faculty member in various colleges and universities, including Metropolitan State University of Denver, Indiana University-Purdue University Indianapolis, and the College of Charleston (South Carolina). In the United States, I also gained certification as a court interpreter and became a registered family law mediator. The law, and the language of the law, fascinate me greatly and I plan to keep a foot in this field.

I am back to my beloved Quebec City and several long-postponed interests, such as creative writing and music, are calling me with a louder voice, and I am listening.